Yoko Story, a novel which has caused controversy among Korean society in the for five years, was finally excluded from the list of teaching materials in California schools on November 5. The novel is regarded by some as offensive as it describes Koreans as assaulters during the Japanese Imperial rule over from the 1910 to the 1945.

Five years ago a story called So Far From the Bamboo Grove, a novel better known by the title Yoko Story by Koreans, was selected as reading material for ’s elementary and middle schools.

The story, written by Yoko Kawashima Watkins, a Japanese American, is about a young Japanese girl named Yoko and her travels back to her homeland. During the travel, Yoko narrates a scene in which Koreans are described as aggressors to the Japanese.

Watkins has continuously insisted that her story was based on her actual experiences in the past. This has aroused a great outrage among the Korean society in .

Choi Mi-young (‘83, Education), the president of the Korean Schools Association of Northern California U.S.A, as well as the principal of the Dasom Korean School in California, took an important role in successfully removing Yoko Story from the list.

“I feel that I have accomplished something that the first generation of American residents should have done for the second generations. The event has shown that the Koreans can combine their voices together to persuade and correct administrative policies of the mainstream society,” said Choi.

It has taken Choi five years to expunge Yoko Story form the list of teaching materials. In the beginning, teachers associated with the Korean Schools Association of Northern California started a signature-collecting campaign for the petition to get rid of the book.

As this campaign became widespread, includingSouthern California , a total of 25 thousand signatures were gathered through this campaign and were finally sent to the California State Government.

On November 5, a public hearing was held by the Education Ministry of California, during which time, five speakers remarked on the issue over Yoko Story.

In response, 12 members of the committee unanimously voted to exclude Yoko Story from the teaching material’s list.

Choi reminisced about the five years of struggle. “It was tough to predict eh outcome while planning the right strategies. No one had gone through any experiences similar to this one,” said Choi.

Choi also said that there is a need to exclude Yoko Story from the teaching materials lists of the entire .

“Korean schools which are spread in 14 regions of the are currently working on the movement. Finally, I will endeavor to have a book published which will be written by a Korean author to be selected as a textbook,” said Choi.

Distorting history has become a very sensitive issue among some Asian countries. Regarding this critical matter, Choi said that the first step for students to take is to become acknowledged about their own country’s history well and to be proud of it. 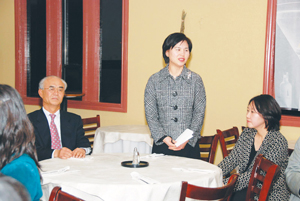 To all the Ewha international students,