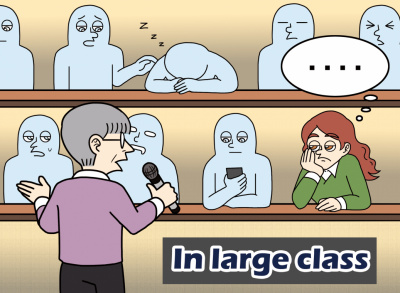 Large-sized classes certainly provide benefits. They allow a greater number of students to take popular courses and thus satisfy their demands. However, both professors and students feel that bigger classes ultimately lower the quality of education.
Ewha professors define an ideal learning environment as one that involves interactions, both socially and verbally between students and professors.
“Interaction between students and professors is essential,” professor Kim Hei-sook (Philosophy) said. “An ideal learning environment is one in which reciprocal interaction takes place between the students and the professors.”
Such interactions are difficult to establish when the number of students is overwhelming. In large classes in which hundreds of students are present, even a mere eye contact with each student is almost impossible; thus, intimate relationships between the learner and the teacher is extremely rare or nonexistent. Professor Kim elaborates on the limits of large-sized classes.
“Education has its foundation on human interaction which is difficult to achieve or experience in large classes where everyone is isolated,” professor Kim said.
Students who have experienced learning in both small and large-sized courses expressed their thoughts. Their response revealed a strong distaste toward large-sized courses. Students assert that bigger-sized classes provide an inept and inappropriate learning environment.
“In large-sized classes, it feels as if professors do not know whether I exist or not so I tend to deviate from learning and focus more on distractions such as my cellular phone,” Lee So-young (Korean, 2) said. “Thus learning in large-sized classes is ineffective since I get easily distracted.”
Students further highlighted the limits of large-sized courses, namely for the lack of interactions they also find crucial in learning.
“In large-sized classes, I cannot focus, and I feel as if I had learned nothing after the semester-long course comes to an end,” Yeo Hee-min (French, 2) said. “In small-sized classes, however, frequent interactions between students and professors are evident.”
Overall, students feel that bigger classes are often ineffective, although they can be of use in special cases.
“Large-sized classes may be appropriate for courses in high demand but generally, they provide ineffective learning environment,” Kim Eun-ha (Business, 1) said.
Concluding from both Ewha students’ and professors’ views on the academic effectiveness of small and large-sized courses, the latter seems to be unprolific, lowering the quality of education and learning. Thus, Ewha’s recent efforts may be a significant step toward reaching successful education.