English versions of Korean Folktales published in the States
상태바 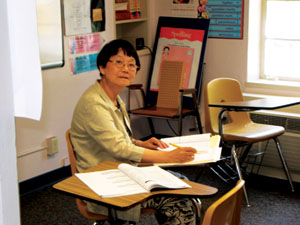 Korean folktales will be published in the United States and is awaited to be read and enjoyed by its global audience. Dongwol Kim Robertson (English ‘60) is at the forefront of this publication. She has put efforts in publishing five Korean folktales including, “Blue Frogs” (Obey your parents), “Congjui and Potjui” (Korean Cinderella), “Hungboo and Nolboo Brothers” (Greed vs. Honetsty, Brotherely Love), “The Three Year Hill” (Positive Thinking), and “Silver Ax and Golden Ax” (honesty) for over seven years. Finally, her works will be revealed in the United States by the end of April after her final approval.
Robertson decided to begin her project to publish American versions of Korean folktales after teaching at an American elementary school for 33 years.
“It was odd that there were no appropriate English versions of Korean folktales for students to read in America. There were folktales that were written by American writers, but they did not convey the exact cultural aspects of Korea,” said Kim. “For example, the pictures in those books were overly exaggerated: the color of the han-bok, Korean traditional clothing, had bright and strong colors that were not usually used in han-bok.”
The new folktale books that are about to be published targets not just Americans, but anyone who are interested in Korean culture.
“I perceive today’s society as a multicultural community, thus, I wanted to create a book that can introduce Korean culture to people from diverse cultural backgrounds in a comprehendible way,” said Kim. Besides, the book can be used not only as novels to read, but also educational materials for American classes.
“Every folktale is composed of several elements: good and evil, talking animals, a royal family member, magic, and a moral teaching. The folktales that I will be published by the end of this month contain all these elements making it a fine teaching material for students,” said, Robertson.
Robertson carefully chose the words in the books through long discussions with her fellow Americans teachers. “It was difficult to use easy words to deliver the contents of the tales, harder than trying to write up an academic writing.”
But thanks to her efforts, the first generation of Korean American parents who have had the problem of finding easy reading materials to read to their children will be able to have these folktales.
“Young Korean mothers are especially welcoming the publication of these books since they have relatively a hard time with English. They want to read out loud to their children but they just could not find reading materials that were easy enough for them. Since the books about to be published are composed of easy English words, I’m very glad to help them out,” said Kim.
The books also provide simple and accurate explanations of Korean culture.
“The books ‘naturally’ introduce the traditional objects and customs of Korea,” said Kim. “For example, got-chin is a Korean word meaning embroidered shoes. In one of my books, got-shin is not written in its English interpretation but in its Korean pronunciation itself.” In addition, a picture of a got-shin is displayed in the same page where the word appears for the first time with a small explanation of the Korean word.
Kim is a writer and a teacher who live with her American husband in Corpus Christ, Taxas. She moved to the States in 1961. She had gone to the United States to study Library and Information Science which she transferred to Education Science in the later years. After years of teaching elementary students, she now works as an ESL (English as a Second Language) instructor at the Kingsville Campus of the Taxes A&M College.
“I basically love children and young students. Many people forget the fact that this younger generation is the future of the society. Each and every one of them will grow up to be excellent persons when nourished with adequate care and teaching,” said Kim.
Today, Kim leads a busy life in the American community working to inform not only students but also American citizens of the Korean culture. Other than instructing ESL classes, Kim does many social volunteering. In the future, she aims to lead a life of helping and teaching others, especially children who are not able to afford learning English in Korea.
During her college years in Ewha, Robertson dreamt of becoming a writer. “Many people including my husband and friends encouraged me when I chose my career as a teacher. My original goal was to become a writer,” said Kim.
Kim also said that she feels very thankful to Ewha for it helped her have dignity in being a woman. “Looking back at my life, I’ve accomplished everything I wanted to become and Ewha has been a big part of it.”
“There is no limit in pursuing your goals,” said Kim. “Things do not occur all of the sudden. You must take steps in order to succeed in what you are doing. Just don’t forget, do what is right for you and your country. As for me, I do what is right for me and for my students.”
저작권자 © Ewha Voice 무단전재 및 재배포 금지

To all the Ewha international students,